With the aim of reducing occupational health risks on work sites.

3 years ago in Building 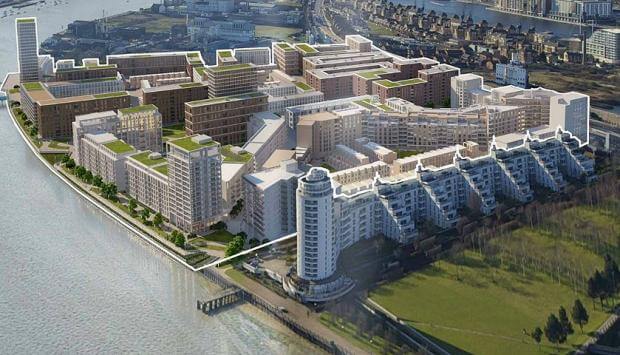 Just minutes from Canary Wharf, and less than half an hour from Oxford Street, the Royal Wharf project will be a rich, textured neighbourhood, focused around a lively central high street, a broad market square and a rolling riverside park. Criss-crossed with inviting side-streets and charming mews, Royal Wharf will also be peppered with public squares and gardens, modelled on the greatest traditions of London estates. A place to picnic in the park at weekends, catch up with neighbours at a favourite café, or amble along almost a full kilometre of a beautifully planted riverside walk. It will be a friendly, even intimate, local neighbourhood.

The sense of space here, where the Thames stretches to almost a mile wide, and the broad flat land of the docks open up great expanses of sky, is like nowhere else in the city. Either side of Royal Wharf there are large parks, adding an even greater sense of natural openness. To the east is Lyle Park, opened in 1924 by Sir Leonard Lyle of the sugar company Tate & Lyle. To the west is the 22 acres of the award-winning Thames Barrier Park, filled with fountains, lawns and flower gardens, as well as a children’s play area and sports facilities.

The regeneration of Royal Wharf is by two vastly experienced leaders in the global real estate market. Oxley Group and Ballymore share a commitment to quality, a knack for successful innovation and a passion for projects that show true ambition, of which there are few better examples than Royal Wharf.

EMS UK LTD is proud to have continued their ever-growing relationship with Ballymore onto this project providing every aspect of temporary electrical and plumbing services from the main HV setup to the wireless fire alarm and temporary standard EMS designed lighting to L.E.D site surrounding bulkheads to help the client deliver a more economic project.
During the project, EMS was alerted that another contractor had damaged the main HV cable feeding the site. We pulled all our resources and within 12 hours arranged for 6 generators to be delivered to the site and within 24 hours we had the site back up and running and the job progressing and back on schedule.

We have also supplied temporary water supplies to residents blocks so they could move in on time before the permanent water supply was allocated to the residing blocks.

About the: admin
More Posts